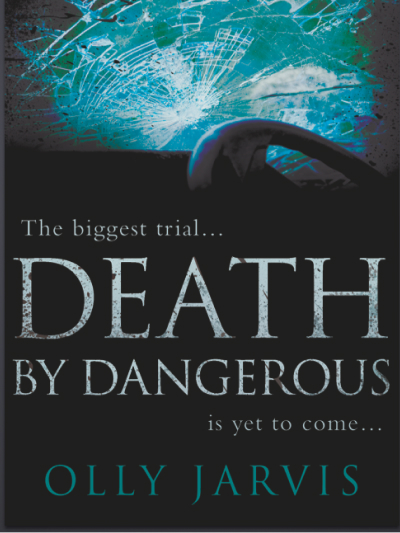 Death by Dangerous is a compelling legal thriller set in Manchester and Bradford.

John Anderson is one of the North West’s most dedicated and successful prosecution barristers. His career is going from strength to strength and he is on the verge of becoming Queen’s Counsel. But the life he once knew suddenly comes crashing down following a fatal road traffic accident…

“They’re saying it was your fault. Someone died.”

Recovering from his injuries, he has no memory of the collision. Was he responsible for the death of a child? Who was his female passenger? Facing charges of causing death by dangerous driving, the professional and personal life he once knew now lies in tatters. Depressed and taking refuge in alcohol, Anderson refuses, in the face of so many unanswered questions, to accept his guilt. He becomes convinced that the gangster he was prosecuting at the time of the crash is in some way involved.

The mystery deepens as his search for the truth draws him into Manchester’s sordid criminal underworld. Shunned by his former colleagues, Anderson finds help from an unlikely source, enabling him to confront his prejudices and re-evaluate his past life. He embarks on a journey of self-discovery and, ultimately, the path for his own redemption.

Anderson knows that defeat means deliverance to a prison full of violent criminals he has prosecuted over the years. He now has to find the strength to fight the most important trial of his life.

‘I was completely spellbound and inside his story that drove me like a car out of control, to the final page within a day of picking this book up.’

‘Death by Dangerous is a nail-bitingly paced thriller in which the barrister John Anderson finds himself caught up in a Kafkaesque spiral of disaster. Though unquestionably the driver of the car involved in a crash which killed two people, Anderson has no recollection of the incident. The multi-ethnic tensions of contemporary Manchester are vividly brought to life as he sees the various elements of his life – career, marriage, perhaps even sanity – disintegrate before his eyes. Death by Dangerous is a very assured debut from Olly Jarvis, and I look forward to reading his next book.’

‘Summer novel: Death by Dangerous by Olly Jarvis is a barrister’s tale: my kind of page-turning legal thriller. I wish I’d discovered this ACE LEGAL THRILLER before I did my “summer read” recommendations.’

‘I jumped at the chance to read this book, when the author contacted me via twitter. The premise of the story drew me in. I knew if it was done well, that it would be a good book. What I hadn’t bargained on was the sheer amount of knowledge within the pages and the superb and natural story telling ability of the author.

It has been a long time since I have read a good courtroom drama/legal thriller. My one reservation was that I might get bogged down with the courtroom scenes, so many times I have picked up a book in this genre and you hardly ever leave the courtroom. I can gladly say that this isn’t the case with this one.

I loved the pace and the grit with which the author writes, the scenes unfolding one by one. Chapter by chapter the story rattles on drawing to a conclusion that cannot be guessed. Clever hints and clues, dropped along the way. The right amount of characters to keep you interested and enough intrigue to keep those adrenalin levels at a high.

I wasn’t surprised to learn that the author is a barrister. Although I have no specific knowledge of the legal system, the cross examination scenes are some of the best I have read. The author is clearly a master of his field. I really hope that there is more to come, I could definitely see some scope to develop the character of John Anderson further in the future.

This is a story about right and wrong. It is about who we can trust and who we can’t. How we can be let down by those closest to us. I refuse to give anything away about the plot, so I am going to stop there. Suffice to say that I read this book in one go. Sometimes we just have to be our own heroes. Just for tonight John Anderson is mine. Highly Recommended.’

Reflections of a Reader

‘Olly Jarvis turns in a really good story, plenty of local interest for Mancunians, and a plot that keeps you guessing.’

‘A criminal barrister from Kew has seen the publication of his first novel, a legal thriller set in Manchester and Bradford.

Oliver Jarvis read law at university after attending Grey Court School and Richmond College and is now a tenant at one of Manchester’s leading chambers.

His novel, Death by Dangerous, tells the story of a dedicated prosecution barrister on the verge of becoming a QC who sees his life come crashing down following a fatal accident.

Mr Jarvis said: “It isn’t always easy trying to manage two careers, especially as I have a family, but the reaction to the novel has made it all worth it.

“I was particularly delighted that the Kew Bookshop, where I spent many happy hours browsing the shelves, in my youth, is stocking Death by Dangerous.”

‘Jarvis used his many years of experience as a criminal defence barrister to weave a riveting novel set in and around Manchester and Bradford. Death by Dangerous tells the story of John Anderson. He is the darling of the North West courts, a highly respected and very able prosecution barrister. His career is in the ascendency, going from strength to strength.

Until it all comes crashing down, when, following a terrible road traffic accident, in which he is severely injured, his whole world comes tumbling down about him.

Although he makes a slow and painful recovery from his physical injuries, he realises that he has no memory of the crash.

Was it his fault? What of his female passenger? Who was she? Why was she even in his car? Did some catastrophic error of judgement on his part cause a child to die? For the first time in his life he faces the criminal justice system that he has spent his entire professional life working in, from the other side of the witness box. Accused of causing death by dangerous driving.

He is fully aware that, as one of the most senior prosecution barristers in the North West, being jailed would bring him face-to-face with many criminals who he helped bring to justice through his long career.

But how can he find out what really took place during the accident? Was it an accident? What, exactly had taken place?

The truth takes him into the sordid underbelly of Manchester, taking him deep within the criminal underworld. His former loyal colleagues and so-called friends in the prosecution service have already found him guilty, so he finds no help there.

But help in his quest for truth and justice does come his way, but from a rather unlikely source. Which leads Anderson to examine himself and he starts to re-evaluate his life so far.

It’s an exciting novel, gripping with more than a few twists and turns before the shocking finale.’